We’re talking about litigating motions next on “Off the Record.” Motions litigation, this is the part of the trial that happens after you’ve been arraigned.

This is a critical stage of the trial. If there’s certain evidence that we want to bring before the court that we might not be authorized to, what we need to do is research the law, draft the brief, and then file the brief before the court. Once we file that written motion, then the government has the opportunity to respond to the motion in writing. After they respond, then we go to court and actually litigate the issue.

On the other side, the government oftentimes files motions to the judge. The defense has to respond to those motions. Okay, what type of motions are we talking about?

What actually gets litigated? 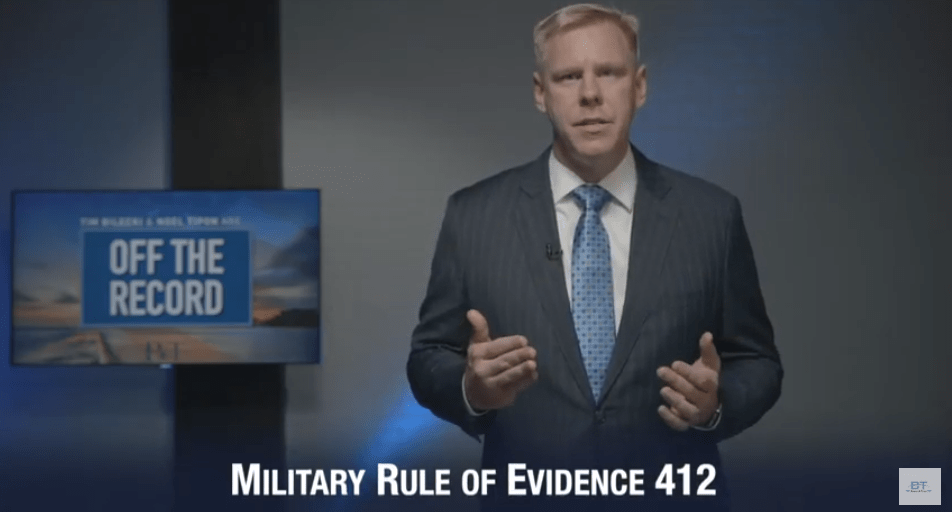 One of the most common things that’s litigated in a court-martial, in particular a sexual assault court-martial, is called MRE 412, Military Rule of Evidence 412 also known as Rape Shield.

That evidence, believe it or not, might not come into trial on its own. We’re going to have to file a motion under MRE 412 to allow access to that information in court. And the government’s going to object to that. So we have to draft a written statement of facts, we’ll research the law, apply the facts to the law, and argue our position. All of this must be done in writing. It’s a time-consuming process, but it’s one that’s critical to a trial. You have to have someone that knows how to research, who knows how to write well, and then also can go into court and argue the motion.

In addition to issues like MRE 412, the Rape Shield, we can file motions to compel witnesses. So if you want certain witnesses there and you want the government to pay for them, we can file a motion with the court asking the court to compel production of a witness.

If we want an expert witness, let’s say there’s DNA in a case and we want a DNA consultant or a DNA expert, we can ask the government to produce them or to pay for them, but oftentimes the government is going to say no because they don’t want to foot the bill. Then we’re going to have to go to the court and litigate our position and ask the court to provide funding for an expert witness or a character witness. All of this happens in motions litigation.

It Shapes The Battlefield

So, after the motions are filed and the responses are written, you’ll have what’s called an Article 39(a) session. And all an Article 39(a) session is the lawyer, yourself, the government counsel, we all go into court and we litigate an issue. All right? That’s all it is. And there will be a date. Sometimes one, sometimes two to litigate all the motions. After that occurs, the judge will then issue a written ruling granting the motion, denying the motion, maybe granting it in part. And that written ruling, sometimes it comes down in a week, sometimes it comes down in a month. It really depends on the particular issue, the particular judge, and the particular case.

Once those motions are ruled on, then we really have a much better idea of how this case is likely going to play out in trial, because trial is really when it all matters. Now we’re going to talk about what actually happens in trial in another episode of “Off the Record.”