Your life could very quickly spiral out of control in the following weeks and months as law enforcement investigates your case and your court date is confirmed. Unfortunately, if you do not protect yourself as soon as possible, these inconveniences will be the least of your worries:

You have fought honorably for your country. Now let us fight for you. Defend yourself against financial fraud allegations by contacting Bilecki & Tipon TODAY.

Every article of the Uniform Code of Military Justice requires prosecutors to prove beyond a reasonable doubt a handful of critical assumptions—known as elements—to convict you of a crime. Two criminal offenses are defined under Article 123, each with its own set of elements. 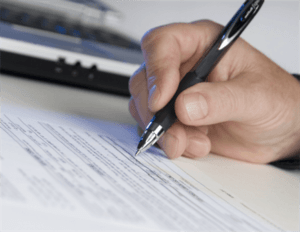 Summary of the Elements of Article 123

Two criminal offenses are defined under article 123, and both require prosecutors to prove that the accused knowingly forged a legally binding signature or altered a legally binding document in order to defraud another person.   Under the first offense—making or altering—prosecutors will attempt to show that you forged a signature or altered a document. Under the second offense—uttering—prosecutors will attempt to prove that you knowingly uttered (i.e. cashed in or attempted to cash in on) the forged check or make use of the altered documents.

Military Defense Attorney for Article 123 of the UCMJ: Strategies and Tactics

Courts-martial that involve forgery or other white collar crimes very often have a paper trail and other evidence which prosecutors will attempt to use to prove their case against the alleged offender.

With the right strategy and narrative, however, an experienced defense attorney can overcome this evidence and secure the best possible outcome in your case.

We may begin by reviewing a few key aspects of your alleged financial fraud offense which includes, but isn’t limited to:

Bilecki & Tipon has the experience and the resources necessary to defend you against the worst of your fraud allegations. Contact Bilecki & Tipon TODAY for a free consultation into your case.

Bilecki & Tipon has protecting service members from allegations of forgery. Our attorneys have extensive financial backgrounds and have defended service members against unscrupulous prosecutors and heavy-handed government charges countless times.   Bilecki & Tipon will help you fight back against charges under Article 123: Forgery

What Is the Maximum Possible Punishment for Article 123?

Article 123 provides the following maximum punishment for any service member found guilty of forging a check or altering any document:

How Does the Government Define Altering a Document?

According to the Manual for Court Martial, alterations must show that a Service Member increased, diminished, or discharged an obligation, either for himself or for another service member.   A related example under Article 123:   “Examples of material alterations in the case of a promissory note are changing the date, amount, or place of payment. If a genuine writing has been delivered to the accused and while in the accused’s possession is later found to be altered, it may be inferred that the writing was altered by the accused.”

Find Info on Other Articles of the UCMJ