Does your chain of command need to read you your rights before they ask you an incriminating question?

This is a question we frequently receive, typically the answer is yes, but it truly depends on the individual facts of the case and how those facts are applied to the law.

Article 31 of the UCMJ states, in pertinent part:

(b)  No person subject to this chapter may interrogate, or request any statement from, an accused or a person suspected of an offense without first informing him of the nature of the accusation and advising him that he does not have to make any statement regarding the offense of which he is accused or suspected and that any statement made by him may be used as evidence against him in a trial by court-martial.

(d)  No statement obtained from any person in violation of this article … may be received in evidence against him in a trial by court-martial. 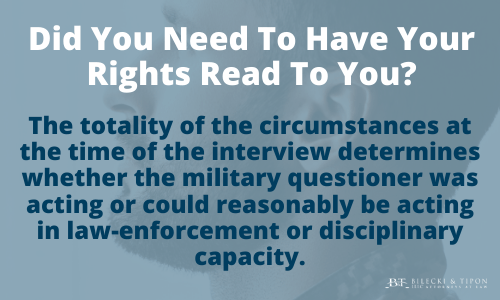 Article 31(b) warnings are required when someone, subject to the U.C.M.J. interrogates or requests any statement from a person suspected of an offense, and the statements regard the offense in which the person is suspected.  United States v. Jones, 73 M.J. 357, 361 (C.A.A.F. 2014) (citation omitted).

In order to affect Congress’s intent that Article 31 protect a servicemember’s right against self-incrimination, suppressed statements are those given if the questioner is participating in an official law enforcement or disciplinary investigation or inquiry.  Id.

The totality of the circumstances at the time of the interview determines whether the military questioner was acting or could reasonably be acting in law-enforcement or disciplinary capacity.  Id. (citing United States v. Cohen, 63 M.J. 45, 50 (C.A.A.F. 2006).

Pursuant to MRE 305(a), a statement taken without proper Article 31, UCMJ rights advisement is involuntary and is treated under M.R.E. 304.  According to M.R.E. 304(a), involuntary statements are generally inadmissible at trial.

The bottom line is that that if members of your command are subject to the Uniform Code of Military justice and are asking questions that could lead to an incriminating response, they are required to read the service member his or her Article 31(b) rights.

If that doesn’t happen–which is common–and those statements are later used against you at a court-martial, your military defense lawyer will need to file a written motion with the court to suppress those statements. Once the motion is filed, the burden is on the Government to establish the admissibility of the statements.  Mil. R. Evid. 304(6). The standard of proof is a preponderance of the evidence. Mil. R. Evid. 304(7).

If you made statements to your command without being read your rights and need advice on what to do next, or if you just need to take your representation to the next level, schedule an appointment with one of the civilian attorneys at Bilecki Law Group for a confidential initial consultation.