We’re going to talk about the referral of charges next on “Off The Record.”

If you’ve been through the Article 32 hearing and you’ve had the charges referred against you, you’re in for a fight. Remember, there’s a preferral of charges. That’s when you go to the commander’s office and the commander has made the decision to actually charge you. That’s the preferral of charges. That’s when you first get informed that you have charges actually against you.

The next step, if you remember, is the Article 32 hearing which is the probable cause hearing. If probable cause is found and the convening authority decides to go forward, charges are then referred against you. These are on legal terms of art under the UCMJ.

The referral of charges has significant consequences. That is the first time that a military judge is typically going to be involved in your case. That is a direct signal to you and to your lawyers that the case is headed for trial.

After The Referral of Charges

You’re not going to make any statements when you go through that process. You’re just going to sign for the charge sheet and let your attorney know immediately because sometimes you might know before the attorney that you’ve had charges referred against you. From here, it’s game on. If it wasn’t game on before, or you didn’t take this seriously, now you have to take it seriously. Because there might have been a lot of hurry up and wait before. You might have been under investigation for a year or six months, but things are going to start happening very, very quickly.

Essentially, the arraignment is where they arraign you on the charges. It stops the speedy trial clock, number one. And it formally notifies you of the charges against you, all right?

At that hearing, the judge is going to ask you how you plead and who you want to represent you. If you’re happy with your counsel, your ADC, your TDS attorney, you’re going to state to the judge on the record that you want that attorney to represent you. You’re going to stand up and put their qualifications on the record. And from that moment forward, they’re the attorney of record and can only be released for certain reasons. If you have civilian counsel on the case, we’re going to file what is called a formal notice of appearance. 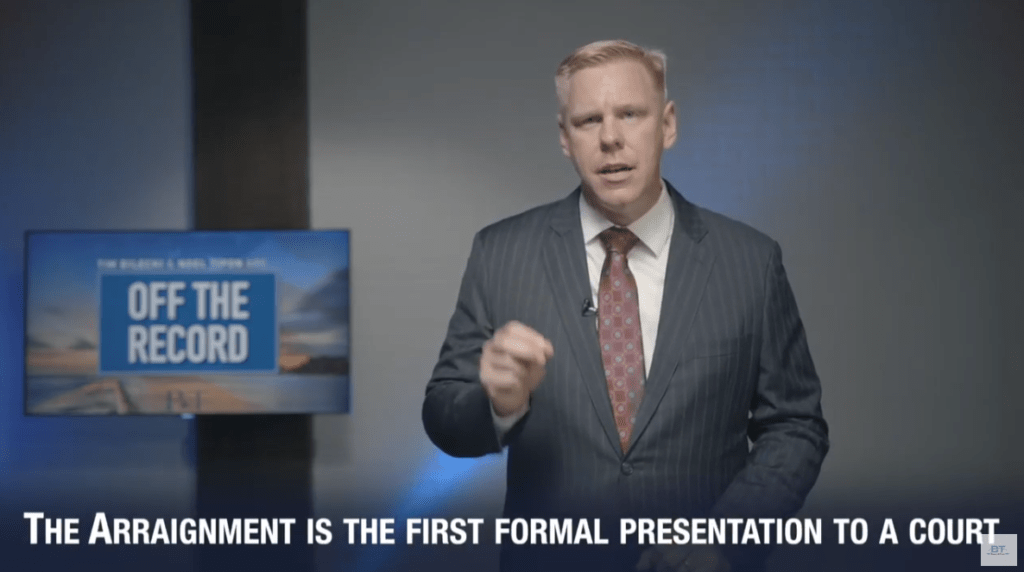 So, at the arraignment, your lawyer’s going to, what’s called, defer the entrance of plea and form. If you’re wondering what that is, in order to plead guilty or not guilty, any motions that you want to file, motions to compel evidence, motions to suppress evidence, motions to compel witnesses, all motions need to be filed before you enter into a plea of guilty or not guilty. As it hasn’t been timely to file motions yet, we’re going to defer the entrance of pleas until a later date. That is standard practice. We’re also going to defer the filing of any motions at that point in time. That’s going to essentially end the arraignment. That arraignment is a five-minute hearing.

So what that basically means is anything the government has filed, anything they’re going to be using against you, who the witnesses they’re going to call, all of the evidence that they have, they need to turn over to the defense counsel so you know exactly what you’re facing, so full discovery triggers at that point in time.

If there’s anything the government is not going to give you or that they say that’s law enforcement privilege to have some other privilege, that’s the time where you have to file motions to compel and file all the motions to litigate to get that discovery.

Those are called basically time for you to go before the court and litigate the motions. It’s called an Article 39(a) sessions. We’re going to have a timeline for when to file motions and all the triggering events are going to be set in stone or if they’re going to be changed, we have to file a request to change them. So, it’s at that point in time you’re going to have a good understanding of how much time you have until you’re going to get ready for trial. At this point in time, you must absolutely kick it into high gear and get ready to proceed towards trial.