If there is one notion that we would like to permanently dispel from military culture it is that only bad soldiers get court martialed. Nothing could be further from the truth and thankfully, the sum of modern military history is ready to back us up on this one. Let us take the curious case of Medal of Honor recipient Lewis Millett as just one such case. Prior to graduating High School, Lewis Millett joined the National Guard in 1938 and saw it as his duty to be ready for what he was sure to be the coming war. In 1940, he then joined the US Army Air Corps only to be devastated when President Roosevelt reaffirmed that America would not be entering the war.
That’s when Millett did what any good soldier would do. He deserted his unit and joined a Canadian artillery unit with hopes of seeing combat. By the time he arrived in Europe, the U.S. had finally entered the war and Millett was allowed to transfer to an American Field Artillery unit in Ireland. Seeing combat in North Africa, Millett earned the Silver Star for driving a burning half track full of ammunition away from his fellow soldiers and would later go on to shoot down a Me-109 with a separate half track mounted machine gun. Needless to say, the man was born to fight.
That’s when his desertion caught up with him and under pressure from superiors, he was court martialed for desertion and fined $52 dollars. A few weeks later, he was promoted to 2nd Lieutenant. As if prior acts of gallantry were not enough, Millet would go on to serve in Korea where he would lead what is now considered the last great American bayonet charge. For this action he was awarded the Medal of Honor. So let us not pretend that only bad soldiers can run afoul of the UCMJ. In fact, we’d submit that good soldiers are in need of good military court martial defense more than any other. 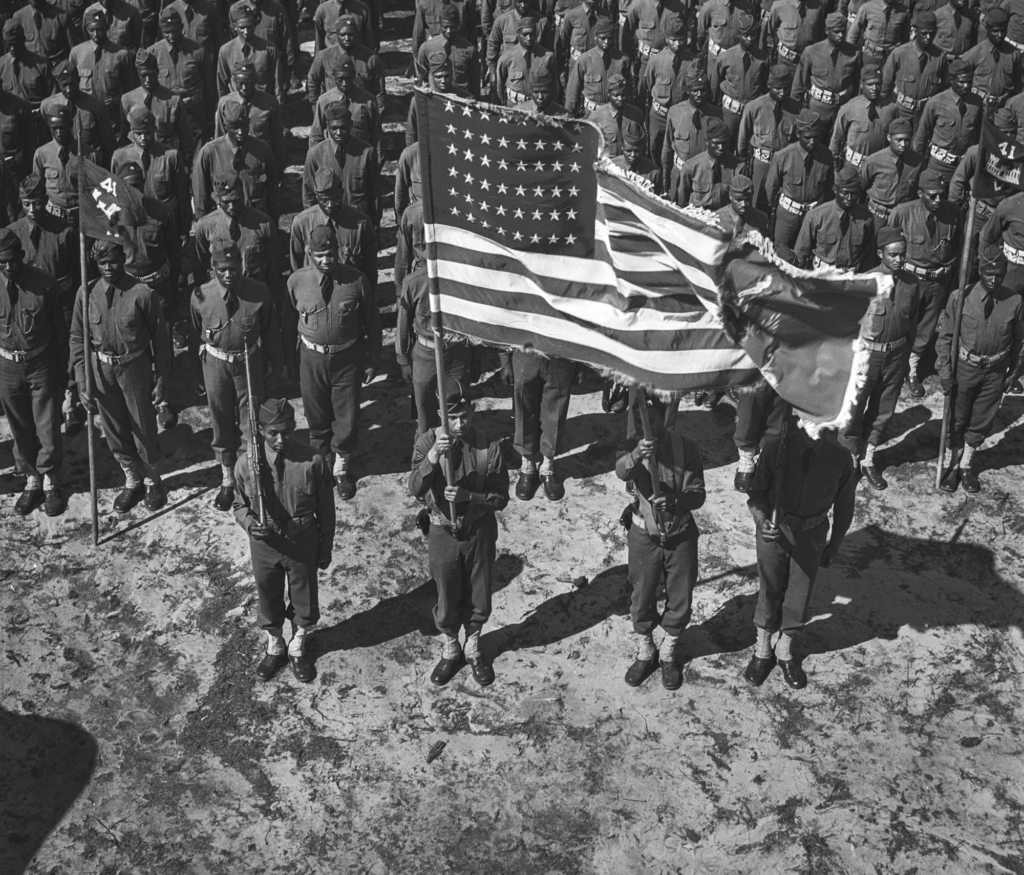 Ft. Bragg is Home to America’s Finest Who Get in Little Trouble with the UCMJ

As one of the largest military installations in the country, Ft. Bragg is home to all the good, the bad, and the ugly that comes with modern military service. Sometimes the good find themselves on the wrong side of the bad and the UCMJ can turn ugly in a hurry as a result. The case of future Colonel Lewis Millett highlights this dilemma to a tee. His Medal of Honor might make it a more high profile example, but we can testify to you that soldiers out of Ft. Bragg, who displayed inexplicable gallantry in combat, ran into trouble back at the barracks more often than you would think.
Much like the case of Colonel Millett, we view this as a force readiness issue. Good men and women who know how to fight need to stay in the fight for the moment our country needs them most. That we would be facing off with China in the South China Sea or perhaps Russia in the Baltic Sea or even the aliens who seem to be hovering around lately without such men and women in uniform would be a tragedy. So yes, if a soldier with multiple deployments finds themselves at trial for allegedly misappropriating some gear out of supply, we are going to fight to keep them in the fight.

From mere allegations to human error, we’ve seen some of the best soldiers face some of the most serious charges and win their day in court. In fact, we pride ourselves and stake our entire legal reputation on our ability to win in court. We are not looking for a plea or a compromise. We are looking to win. So let’s run through a few of the charges that we beat in court every year.
UCMJ Article 120 or Article 134 (Sex offenses)
These cases can include rape, sexual assault, aggravated sexual assault, abusive sexual contact, sexual assault of a minor, indecent viewing, indecent recording, forcible pandering, indecent exposure, and other Article 120 and Article 120(c) offenses. The military’s problem with sexual assault has been garnering all the headlines and in many ways, rightfully so. No soldier deserves to be the victim of assault. However, on an equal footing, no soldier deserves to be the target of false allegations. They don’t have to have their career ruined and they certainly do not need to lose their freedom over the military’s desire to show they are making progress. If you are innocent, you must fight the charge like your life depends on it, because it does.
UCMJ Article 121 (Fraud and Larceny)
We defend cases such as conspiracy to defraud the military, BAH fraud, OHA fraud, extortion, larceny, wrongful appropriation, and more. Once again, false allegations and good old fashioned human error can lead to some very serious charges under the UCMJ. Sadly, we’ve seen officers try to save their careers by passing the buck on missing gear down to a senior NCO. In recent news, the Chairman of the Joint Chiefs, General Milley reported that he was stunned over the number of missing weapons in the military. All he’d need to do is look at the court martial dockets to know how big the problem is and that someone is always left holding the bill.
UCMJ Article 128 (Assault and Violent Crime)
We represent service members facing charges including murder, manslaughter, aggravated assault, assault, and cases involving self-defense and defense of another. During an interview about his gallant charge in Korea, Col Millett remarked that he was shocked how easy a bayonet went in and out of a human body. While that might sound a little callous, the truth is that a pool cue, beer bottle, and even a good old fashioned stick can do serious damage in a fight. It doesn’t take much for a little bar scuffle to get out of control. Men who are trained to fight are often shocked at how good they are and unfortunately, it can cost them their careers.
UCMJ Article 112a (Drug Crimes)
We defend cases involving drug possession, drug distribution, drug importation, drug manufacturing, drug trafficking, positive urinalysis cases, tampering with urinalysis cases, and more. These cases often involve illegal controlled substances such as marijuana, LSD, methamphetamines, cocaine, ecstasy, molly, opioids, analogues, and more. We understand the need to regulate illegal substances in the military, but we are not here to judge how a Spec Ops team copes with some of the insane things they have been asked to do during the GWOT wars. A drug charge doesn’t have to be the end of a military career and if we ever get into a fight with a near peer force like China, a little marijuana use is not going to be our biggest problem. Once again, the Bilecki Law Group will fight to keep you in the fight.
Punitive Articles of the UCMJ 77-134 (Military Specific Offenses)
These include charges such as fraternization, unauthorized absence (AWOL), disobeying a lawful order, conduct unbecoming an officer, and much more. This is what got Lewis Millet the unique honor of being one of the few people to have a court and a Medal of Honor on his service record. The man wanted to fight and that was his worst crime.

Do We Provide Court Martial Defense at Fort Bragg?

Though our headquarters is in Tampa, we consider the entire Southeast of the United States as our AOR. Because good soldiers at Ft. Bragg face court martial with some regularity, we find ourselves in North Carolina often. Considering we’ve even been flown into places like Hawaii and Korea to defend cases in court, we actually appreciate the short flight more than you know. Oftentimes we are there to defend a senior NCO or Officer fighting for their career. Other times, we are there for the junior enlisted man whose family is helping him fight for his freedom.
In either case, what we do best is take the fight to court. The military justice system doesn’t like to lose and it knows that its best chance of winning is to get the defendant to admit guilt and plead before it ever hits the courtroom. That’s why it is almost a shock to the system when a soldier or their family fights back. We’ve actually developed a pretty strong reputation in the military justice system and when military prosecutors see the Bilecki Law Group, they know they’ve got a fight on their hands. Why do we fight so hard? That’s because we truly believe with every fiber of our being that a court martial does not equal a bad soldier. It was true for Lewis Millett and it can be true of you as well.

Perhaps one of the more amusing details of Colonel Millet’s story was that he didn’t travel to Canada alone and it originally wasn’t his idea. He travelled to Canada with a Marine who was given a bad conduct discharge and who also wanted to get into the fight. The two of them were then assigned to a top-secret radar unit in the Canadian military. Millet would laugh at the fact that an Army deserter and a Marine with a BCD were assigned to such a secret unit. However, the Canadian military likely recognized good men and good soldiers when they saw them.
There will always be a great deal of respect for good men and women who just want to get into the fight. That’s why many of you joined the military to begin with and now that you are facing a court martial, it all seems like a bad dream. It doesn’t have to be that way. The charges you are facing do not have to mean the end of your career. It does not have to cost you your freedom. Most importantly, it doesn’t have to take you out of the fight. Not as long as you fight back. We’d be happy to take a look at your case and we’ll shoot you straight on what you are facing. Then, as long as you are willing to fight, so are we. Good soldiers always fight back, so please reach out if that sounds like you.