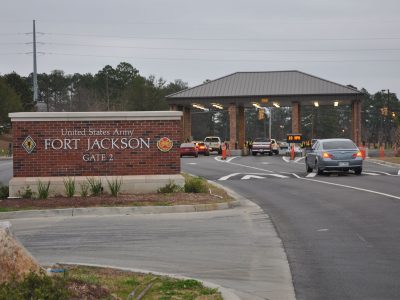 When a Soldier at Ft. Jackson, or anywhere for that matter, receives their first notice that they are facing court martial, it’s a moment that can make anyone weak in the knees. Everything you’ve fought for and perhaps an entire career or retirement in the balance, could all be for naught if the military justice system has its way. Now, Ft. Jackson is home to the US Army Chaplain School and as such, it might be helpful to inspire those facing court martial with an example of what it means to remain steadfast in the face of overwhelming odds. For this, we’ll profile the service of Army Chaplain Emil Kapaun.
Emil Kapaun didn’t carry a weapon and he never fired a bullet in anger and yet, he would walk away with the nation’s highest military honor. He was serving as chaplain with the 8th Cavalry regiment which had recently fought its way from the Pusan Perimeter close to the Chinese border in 1950 Korea. With victory seeming imminent, Kapaun had recently written home saying that he thought he would be home by Christmas. Unfortunately, on November 1st the Chinese launched their surprise attack into Korea and both American and South Korean forces were paying a heavy price.
Casualties among the 8th Cavalry were soaring and entire ROK regiments were obliterated into non-existence. The order to retreat was given and every able bodied American began to move South. That is, every able bodied man except for Kapaun. He could be seen walking calmly up and down the battlefield giving aid to the wounded. He willingly remained behind knowing full well that he would be captured with the wounded who could not travel. As the Chinese arrived, they began to kill any American that remained.
During the chaos of this battle, Kapaun noticed a wounded Chinese soldier and immediately ran to render aid to the enemy under hopes of negotiating a peaceful surrender. Remarkably, it worked as the Chinese officer ordered his men to stop fighting. It was then that a Chinese soldier drew down on a wounded First Sergeant and Kapaun pushed the soldier out of the way with no regard for his own life. As a POW, Kapaun continued his service to others above himself. 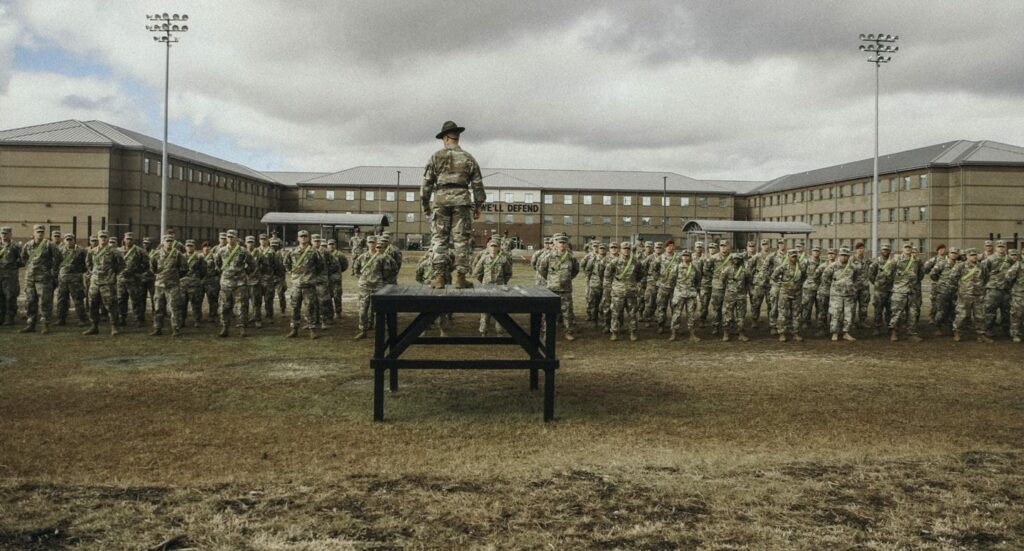 Despite the freezing cold, Kapaun would regularly give what clothing he had to others in the camp. When they were near starvation, Kapaun would feed his rations to those more sick. He would regularly forage for food, sneak it past the guards and give it to others. He was mocked by the North Korean guards for his faith, but by Easter of 1951, he was still alive to lead a service. Eventually, malnourishment and disease took its toll on Kapaun and the end was near. The North Koreans saw it as an opportunity to rid the camp of the man that offered others hope.
The North Koreans began to drag Kapaun to the “death house” where he would be left without food and water to die as the men he served pleaded with the North Koreans to spare him. Kapaun looked at the men and simply replied, “I’m goin’ where I’ve always wanted to go.” Kapaun died on May 23rd 1951 and it was only recently in 2021 that his remains were found. Kapuan would receive the Medal of Honor and the genuine admiration of any man or woman to ever wear the uniform.
0
Years of Experience
0 +
Total Attorney
0 +
Happy Clients
0 %
Success Rate

Standing Tall In Front Of The UCMJ Takes Courage

Now, whether you are a person of faith or not, we all can admire the courage and tenacity of Chaplain Emil Kaupan. As Fort Jackson continues to train one generation of chaplains after the next, if they keep making them like Kapaun, we’re going to be in good hands. We are going to suggest to you that taking on the UCMJ will take courage, much like Kapaun showed in the face of adversity. Unlike Kapaun, we are going to suggest that you fight like hell and leave the passivity to the chaplains when it comes to your potential court martial. There is but one way forward and that is to hook and jab your through this upcoming trial.
Founder and namesake, Tim Bilecki, spent years inside the military justice system as a senior defense counsel for the Army. He can tell you first hand that what you are facing with the military justice system comes after you look remarkably similar to 100,000 screaming enemy Soldiers pouring into North Korea from China. The odds are daunting and you can’t run fast enough from the outcome. Tim knows that your best chance is to turn around and give the military justice system exactly what it didn’t want and that is a fight.

How To Fight Back Against Charges Under the UCMJ

The truth of the matter is that if you can be charged for it, then you can fight it. That might come as a shock to you because military prosecutors like to convince you that resistance is futile. That’s because this is how they win. They try to overwhelm you and they have nearly limitless resources to get the conviction. They expect you to roll over and when you don’t, trust me when we say it is almost a shock to the system. Not only can you fight, but you can fight and win. Below you’ll see a list of a few of the charges we fight, defend, and win. You’ll quickly see that we don’t scare easily which is good news for you.
UCMJ Article 120 or Article 134 (Sex offenses)
These cases can include rape, sexual assault, aggravated sexual assault, abusive sexual contact, sexual assault of a minor, indecent viewing, indecent recording, forcible pandering, indecent exposure, and other Article 120 and Article 120(c) offenses. We are currently in a season of military history where we are trying to expunge sexual assault from the ranks. While we enthusiastically support that effort, we believe that victims are not served justice when innocent men and women are prosecuted. The current climate is such that an allegation is being treated as proof of guilt and that is unacceptable. If you are innocent of these charges or you feel the entire story is not being told, then you need to fight for your career, retirement, and freedom. Please do not let a military prosecutor tell you that your career is over until you have had a chance to reach out for help. You can win this fight.
UCMJ Article 121 (Fraud and Larceny)
We defend cases such as conspiracy to defraud the military, BAH fraud, OHA fraud, extortion, larceny, wrongful appropriation, and more. We have a feeling if Kapaun were your priest and he caught you attempting BAH fraud, he’d say you are forgiven. The military justice system, not so much. BAH fraud is one of the more common charges we see and if you let them, the military will hang you out to dry just to set an example. Oftentimes these charges come from a young service member trying to provide for their family or just an honest mistake. There is no reason for you to be the “example.” It’s your career and your life, so fight for it.
UCMJ Article 128 (Assault and Violent Crime)
We represent service members facing charges including murder, manslaughter, aggravated assault, assault, and cases involving self-defense and defense of another. It’s our best guess that Kapaun was much of a rebel rouser, but we also have a strong suspicion that you wouldn’t want to get on his bad side when it comes to hurting those he cared for. Many military fights start out as self-defense and morph into something altogether different as it escalates. A chair, beer bottle, or pool cue gets involved and you are facing serious charges when you were just sticking up for others. Soldiers fight in the military and it shouldn’t be the end of a career.
UCMJ Article 112a (Drug Crimes)
We defend cases involving drug possession, drug distribution, drug importation, drug manufacturing, drug trafficking, positive urinalysis cases, tampering with urinalysis cases, and more. These cases often involve illegal controlled substances such as marijuana, LSD, methamphetamines, cocaine, ecstasy, molly, opioids, analogues, and more. To date, South Carolina has not legalized marijuana. However, at some point the military is going to have to come to terms with the fact that marijuana is legal in over 28 states. It simply can’t be the career killer that it has been in the past. Moreover, we believe that Soldiers are always more than the sum of the charges facing them. You can fight drug charges and you can win.
Punitive Articles of the UCMJ 77-134 (Military Specific Offenses)
These include charges such as fraternization, unauthorized absence (AWOL), disobeying a lawful order, conduct unbecoming an officer, and much more. These articles serve a legitimate purpose, but how they are enforced from command to command is mind blowing. One command will give you a slap on the rist and meanwhile, other commands will drag you out to the career “death house” for the exact same charge. Sometimes, just sometimes, you have to fight these charges out of principle. They might seem small, but that mark on your record can come back to haunt your career later.

Have Faith, Hold The Line, And Fight Like Hell

If you are under investigation or facing a court martial, it is scary, we get that. Yet, we want to inspire you with that feeling of relief Soldiers feel when it is all over and they didn’t lose it all. We recently had an Army field grade officer facing confinement, loss of rank, and loss of retirement. She was terrified at first, but when it was over there was no confinement, no loss of rank, and she had all of our retirement intact.
That’s because she was willing to fight. If you are scared, but willing to fight, reach out to us. Our offices are in Tampa, but we have clients fly us in from all over the world to defend them at trial. We put together a defense that is so offensively aggressive, we might need to ask a chaplain for forgiveness when it’s over. Reach out to us and we’ll always shoot you straight on what you are facing. Just as long as you are willing to fight like hell, then so are we. Have faith and hold the line for your career and family. To any chaplains out at Fort Jackson, thank you for all you do and we hope you are inspired by Kapaun. To anyone facing charges, let’s leave the passivity to the priests and let’s get in the trenches together and fight for your career, freedom, and retirement.