When a service member who makes a statement—oral or written—which is deemed indecent by another, he or she is at risk of being accused and convicted under Article 134 of the UMCJ: Indecent Language.
In what seems like a nightmare scenario, your own words could be used against you to convict you of indecent language under Article 134. What may have been harmless banter or a joke has the potential to not only destroy your military career outright but cost you your benefits and even your freedoms.
A conviction of indecent language could land you behind bars for years. Do not take the risk. Hire an experienced law firm to take the fight to the prosecution.

What Is Article 134 (Indecent Language) of the UCMJ?

Every article of the U.C.M.J. requires prosecutors to prove beyond a reasonable doubt a handful of critical assumptions—known as elements—to convict you of a crime.

For a soldier to be convicted of indecent language under Article 134, the following elements must be proven:

Summary of the Elements of Article 134 (Indecent Language):

Prosecutors will often focus on what was said, and just as important, to whom it was said. They will attempt to prove that your words were, in fact, indecent in the context and that they violated “community standards” in an obvious way.

Military Defense Attorney for Article 134 of the UCMJ: Fighting Back Against Indecent Language Charges 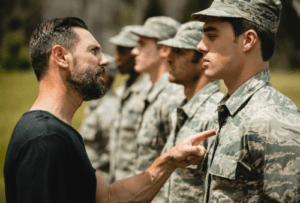 One comment said in the wrong place at the wrong time is more than enough for accusations of indecent language to land on the desk of your commanding officer, CID, OSI or NCIS. Such comments—while often completely harmless—are still dangerous when said to the wrong person or persons. When taken out of the context of the conversation (which may have been mutually flirtatious), a judge or jury can easily find you guilty under Article 134 of the UCMJ.   You may be in disbelief and completely stunned that your words were taken by someone to be indecent or perverted. But you absolutely must take these charges seriously. Not doing so could risk more than just your military career. Your freedoms and financial stability are all on the line.   If you care about your military career and do not want to see your good name slandered by indecent language charges, then you must consider hiring an attorney with extensive court-martial experience, who is well-positioned to reach you quickly and who has a team ready to put extensive hours into your case.   Let’s take a look at these factors in more detail:

Bilecki & Tipon LLLC has been defending active duty and reserve service members of every branch of the armed forces no matter where they are in the world or how “unwinnable” their case appears to be. The case history of our court-martial defense lawyersmakes it clear why we are one of the most reputable names in the world of court-martial defense.   Learn more about our case history, and then contact us for a confidential consultation today!   Bilecki & Tipon will help you fight back against charges under Article 134: Indecent Language

What Is the Maximum Possible Punishment for Article 134 (Indecent Language)?

A conviction under Article 134 pertaining to indecent language could lead to the following maximum charges:   Communicated to any child under 16:

How Does the Military Define Indecent Language?

According to the Manual for Court Martial, “indecent language is that which is grossly offensive to modesty, decency, or propriety, or shocks the oral-sense, because of it’s vulgar, filthy, or disgusting nature, or its tendency to incite lustful thought.”