What Is The Cost Of Doing Nothing?

Off The Record: Episode 7

Noel: What’s the real cost of the conviction? What’s the cost of doing nothing? Find out on this episode of “Off the Record.”

Well, can you put that in a dollar term? Sure, if you lose your GI Bill, that can be $30,000, $40,000 a year with the new GI bill. That can be hundreds of thousands of dollars. If you lose retirement, that can be millions of dollars. But what’s more important necessarily than the money is the dignity and the other loss that you have. You can always earn more money, you can always get a second job, there’s always ways to recoup that.

Not being there for graduations, getting out and being outside the brig or outside the confinement facility and saying, “What the hell happened to my life and trying to restart and start over.”

The costs of that really aren’t in monetary value, although we can certainly put a monetary value on that. They’re really extraordinary and they change people’s lives in a very negative and very impactful way.

You’ll have a master sergeant with 17 or 18 years in who’s doing extraordinarily well, looking forward to retirement, gets hit with a sexual assault conviction. And six seven or eight years later, their life is devastated and it changes the entire dynamic of their family. And it changes everything.

The Cost Of Your Reputation

Noel: I had a case just the other day where I represent a master gunnery sergeant who had 24 years of Marine Corps service, and he was facing an allegation of sexual assault. And just a reduction in two ranks, just a reduction in two ranks and I gave it as an example is over a half million dollar hit to retirement. So that’s a simple monetary way to talk about what the cost of doing nothing is. But the real cost, the intangible cost is the cost of your future. The cost of your family, the cost of the rest of your life.

And it’s not just what happens going to prison, going to jail, because people can do 9 months, 12 months, 24 months standing on their head. That’s easy. That’s easy time.

People always tell me that it’s easy time. But the real cost is when you get out of prison and you are branded a sex offender and you’ve lost your family. You’ve lost your ability to go out there and earn that living that you had before, and that’s the real cost. 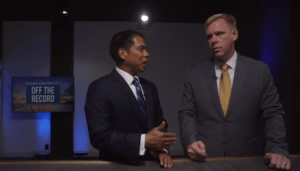 What Are You Left With?

Timothy: Once you are convicted, and the attorney goes home and the witnesses leave and your wife leaves, and your friends leave. The only person that’s left is you and I’ve seen it, they go to prison they get in the handcuffs, they get taken to the government van, they’re taken to the hospital. They’re given the out-processing checklist. They’re taken over to the brig. And when the door slams, it doesn’t open again.

Those first two nights I hear are the worst because you’re put in solitary confinement for the first, I think it’s 48 hours or 72 hours, depending on the confinement facility. And you’re left alone with just you and your thoughts and the world starts passing you by and you’re stuck in slow motion, or you’re just stuck.

Is it worth it?

We put in our blood, our sweat, our tears. We spend the long nights, we spend the time away from our families to defend your ability to go home to yours. And we fly out to wherever it is, whether it’s in Hawaii or somewhere else.

We try the week-long case. We’re all nervous. We’re all working really hard. And there’s that one moment of a trial and it’s the moment where you hear, usually a knock on the door and it’s that the jury is ready. And it’s kind of a powerful moment in trials that the bailiff comes and gets the judge, everyone gets rounded up and they say, “We have a verdict.”

And my heart pounds when that happens, your heart would be pounding as well, because all of that work, everything is on the line.

We marshal into the court sit down, the jury comes in. The judge says, “Members do you have findings.” They say, “We have.” The paper gets forwarded. It gets taken to the judge and the judge reads it silently to himself. The judge is holding a paper that’s going to change your life and we take pride in that. And ownership of it, we have so many hours and we are personally invested in this.

At that moment, the amount of stress and weight of the world is lifted and my client changes, smiles come back, we hug, usually, I’ve got a wife or a mother or family members crying in the background. We’re hugging it out, high fiving and that’s the best moment. And the day that moment doesn’t become everything to me is the day I stop practicing law.

So as much as the other person who didn’t maybe have the opportunities is walking away to jail and change their family tree forever. The other person is going home to their wife, going back to their command, and walked through this hell and walked back out of it again. You have a choice, choose, what is the cost of doing nothing.

When the Deck is Stacked Against You | Tim Bilecki

https://www.youtube.com/watch?v=-j7DIz_3YuY A Look Into the Mind of Court Martial Attorney Tim Bilecki Hosted by Carla Zelaya “No one to represent their interests.” Carla: Now, can …

https://www.youtube.com/watch?v=ZYJqm0D6q6Q One of the most common questions we get here at Bilecki & Tipon, LLLC is why a military service member would need to hire …