Impeaching Trump for asking Ukrainian President to find out why Biden’s son’s prosecution was stopped – will it fly?

“In the fervor to impeach President Trump, his political enemies have ignored the text of the Constitution. As a civil libertarian who voted against Trump, I remind those who would impeach him not to run roughshod over a document that has protected us all for two and a quarter centuries. – Alan Dershowitz, Harvard law professor and author of The Case Against Impeaching Trump.

On July 25, 2019, President Donald Trump called President Volodymyr Zelensky of Ukraine to congratulate him. In the course of the conversation, President Trump said:

“There’s a lot of talk about Biden’s son, that Biden stopped the prosecution and a lot of people want to find out about that so whatever you can do with the Attorney General would be great. Biden went around bragging that he stopped the prosecution so if you can look into it… It sounds horrible to me.” Memorandum of Telephone Conversation of President Trump and President Zelensky published by the New York Times, perceived as anti-Trump and purveyor of all the fake news that is unfit to print. Read it here.

Hunter Biden, son of Democrat Party presidential candidate Joe Biden reportedly served on the board of Burisma Holdings Limited, a Ukrainian gas company, from 2014 to 2018. A former Ukrainian Prime Minister Mykola Azarov has called for an investigation of Hunter Biden to determine whether he complied with Ukrainian law, according to The Hill.
“Biden has spoken openly that, as vice president, he held a $1 billion loan guarantee over the head of Ukraine’s president, forcing him to fire a corrupt prosecutor who was despised by the international community. That prosecutor at one time investigated the Ukrainian gas company on whose board sat Biden’s son, Hunter,” reported The Hill.

“Joe Biden’s boast about his “quid pro quo” with Ukraine is compelling evidence that he may have used his public office to confer a benefit ($1 billion) in exchange for something of value –shutting down an investigation to help his son. This is where the Foreign Corrupt Practices Act comes into play, as well as other federal felony statutes such as bribery, extortion, and honest services fraud. The Justice Department would be justified in investigating Biden to determine whether he took any official action involving taxpayer money as Vice President to benefit his son,” according to Gregg Jarret of Fox News. 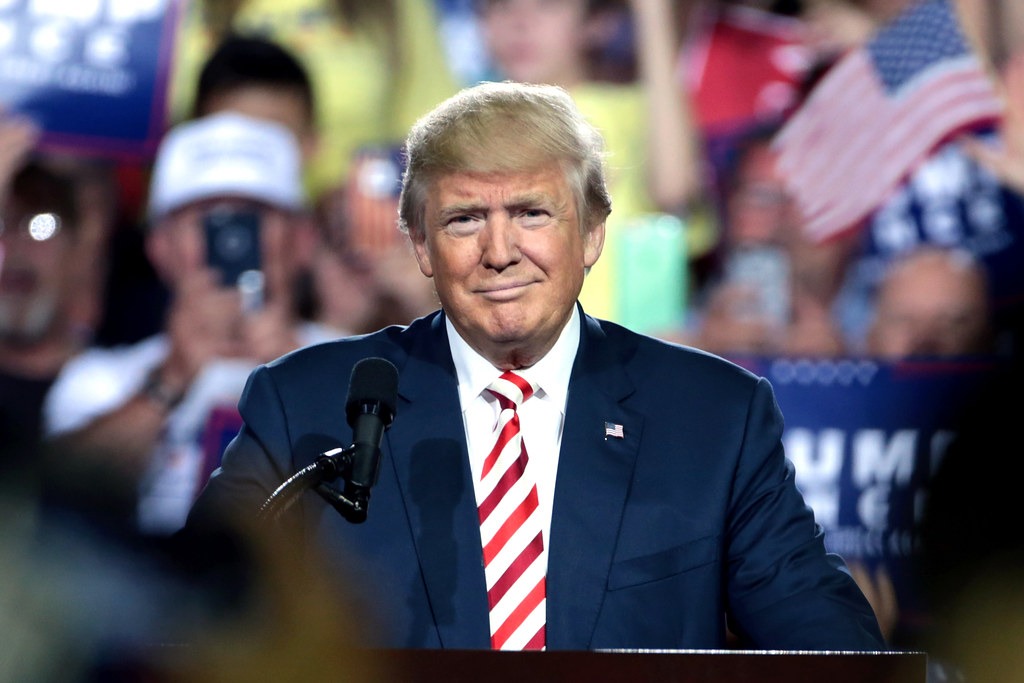 President Trump had the right to ask Ukraine for assistance “in connection with the investigation, prosecution, and prevention of offenses, and in proceedings related to criminal matters” pursuant to the “TREATY BETWEEN THE UNITED STATES OF AMERICA AND UKRAINE ON MUTUAL LEGAL ASSISTANCE IN CRIMINAL MATTERS, signed at Kiev, Ukraine on July 22, 1998, and entered into force February 27, 2001. This treaty was negotiated during the time of President Bill Clinton, a Democrat.

HOUSE IMPEACHMENT INQUIRY PREMATURE AND BASELESS
Even before President Trump publicly released the Memorandum of his Telephone Conversation with President Zelensky, the U.S. House of Representatives commenced a formal impeachment inquiry against President Trump to determine whether the President committed an impeachable crime based on a whistleblower’s report that President Trump had asked the Ukrainian President to look into a presidential rival’s son’s activities.

DEEP THROAT II
The identity of the “whistleblower,” whom we shall give the pseudonym “Deep Throat II” has not been publicly revealed but there is a lot of speculation – that she is a woman, works for the federal government, and pro- Demoncrat. Go to Facebook if you want to know what they are calling the whistle blower.
Deep Throat II does not have first-hand knowledge of the conversation of President Trump and President Zelensky. To impeach a President based on hearsay information violates due process.
Trump said that he wants to meet his accuser, Deep Throat II. Trump has a constitutional right to confront his accuser. Will the Demoncrats prevent him?
As pointed out by Alan Dershowitz, “Just as the first casualty of war is truth, so too, the first casualty of hyper-partisan politics is civil liberties. . . many traditional civil libertarians have allowed their strong anti-Trump sentiments to erase their long-standing commitment to neutral civil liberties. They are so desperate to get President Trump that they are prepared to compromise the most basic due process rights. They forget the lesson of history that such compromises made against one’s enemies are often used as precedents against one’s friends.”-

THE IMPEACHMENT PROCESS
In the United States, the House of Representatives shall have the sole power of impeachment against an impeachable official for an impeachable crime. U.S. Constitution, Art. I, Sec. 2. It is akin to a criminal case where the grand jury brings an indictment against a person for a crime such person has allegedly committed. A simple majority of the House (218 votes out of 435) is needed to impeach.
The Senate has the sole power to try all impeachments. No person shall be convicted without the concurrence of two thirds of the members present (67 if all 100 senators are present). U.S. Constitution, Art. I, Sec. 3.

GROUNDS FOR IMPEACHMENT
The United States Constitution provides: “The President, Vice President, and all Civil Officers of the United States, shall be removed from Office on Impeachment for, and Conviction of, Treason, Bribery, or other high Crimes and Misdemeanors.” Art. II, Sec. 4.

IS ASKING A PRESIDENT OF ANOTHER COUNTRY TO LOOK INTO POSSIBLE MISCONDUCT BY A RIVAL’S SON AN IMPEACHABLE CRIME?
Can any sane individual rightfully claim that it is an impeachable crime for the President of the United States to ask the President of Ukraine to “look into” Biden’s “bragging that he stopped the prosecution” of his son, especially when there is a treaty of mutual assistance on criminal matters between the United States and Ukraine?
It is not treason. It is not bribery. It is not a high crime. It is not a misdemeanor.
“Treason” is defined in Title 18, Section 2381 of the U.S. Code thus: “Whoever, owing allegiance to the United States, levies war against them or adheres to their enemies, giving them aid and comfort within the United States or elsewhere, is guilty of treason and shall suffer death, or shall be imprisoned not less than five years and fined under this title but not less than $10,000; and shall be incapable of holding any office under the United States.”
“Bribery” is defined in Title 18, Section 201of the U.S. Code thus:
“(b) Whoever–
(2) being a public official or person selected to be a public official, directly or indirectly, corruptly demands, seeks, receives, accepts, or agrees to receive or accept anything of value personally or for any other person or entity, in return for:
(A) being influenced in the performance of any official act;
(B) being influenced to commit or aid in committing, or to collude in, or allow, any fraud, or make opportunity for the commission of any fraud, on the United States; or
(C) being induced to do or omit to do any act in violation of the official duty of such official or person;”
The term “other high crimes and misdemeanors” is not defined in any statute. Applying the statutory construction rule ejusdem generis (Latin for “of the same kind” meaning that where general words follow an enumeration of specific things, such general words are to be construed to apply only to things of the same kind as those enumerated), the term “or other High Crimes and Misdemeanors” means crimes and misdemeanors which are as serious as treason and bribery.
The term “high crimes and misdemeanors” means what it says – that “crime means crime, not “offenses” or “misdeeds” which the Constitution did not specify.
See Alan Dershowtiz, The Case Against Impeaching Trump.

For instance, on December 19, 1998, President Bill Clinton was impeached by the House of Representatives for “high crimes and misdemeanors”. Clinton had denied under oath in a deposition that he had any involvement with Monica Lewinsky during the investigation of Paula Jones’ sexual harassment complaint against Clinton. Clinton’s denial was debunked by the presentation of Lewinsky’s blue dress stained with Clinton’s love juice. The charges against Clinton were lying under oath and obstruction of justice which are crimes. See https://billofrightsinstitute.org/elessons/the-impeachment-of-bill-clinton/

IMPEACHMENT MUST STRICTLY FOLLOW CONSTITUTION
Alan Dershowitz, a Harvard Law School professor, who declared that he is against Trump and voted for Hillary Clinton, said in his book “The Case Against Impeaching Trump”:
“If the formal process of removal is to have legitimacy, it must be done in strict compliance with the provisions of the Constitution. Despite frequent claims that the impeachment and removal process is entirely political, that is not the case. Removing a president requires that the legal criteria, set out explicitly in the Constitution, must first be satisfied before political considerations can come into play. The impeached president must be found guilty and convicted by two-thirds of the Senate of “treason, bribery, or other high crimes and misdemeanors.”
“. . . if a president has not committed any of these specified crimes, it would be unconstitutional to remove him, regardless of what else he may have done or may do.”

CAUTION URGED IN LAUNCHING NUCLEAR POWER OF IMPEACHMENT
Laurence Tribe and Joshua Matz, authors of “To End a Presidency: The Power of Impeachment” have, according to Dershowitz, urged “caution in deploying the nuclear weapon of impeachment” saying:
“While evaluating alleged presidential misconduct, Congress must carefully avoid crying wolf. If legislators are quick on the trigger in urging impeachment – or in suggesting that possibility – each subsequent call may be taken less seriously. A nation constantly warned that the president is a despot can grow numb to those accusations especially if prophesies aren’t immediately realized.”

A simple majority or 218 out of 435 votes in the House are needed to impeach the President. There are 235 Democrats. Of these, 31 Democrats represent districts that voted for President Trump in 2016. If none of the 31 vote to impeach President Trump, there will be only 204 votes for impeachment. At least 14 of the 31 must join for the Democrats to be able to impeach President Trump. Will they?
In the Senate, a super majority of two thirds or 67 out of 100 senators is necessary for conviction and removal of the President. There are 51 Republicans, 47 Democrats, and 2 Independents. If all 47 Democrats and the 2 Independents vote to convict, they are short of 18 votes to obtain a two thirds vote. It is possible to get 1 or 2 Republicans to betray their President and their Party but well-nigh impossible to get 18 to do so.
Are the Demoncrats doing a moro-moro or a zarzuela?

(Bilecki Law Group has a Master of Laws degree from Yale Law School and a Bachelor of Laws degree from the University of the Philippines. His current practice focuses on immigration law and appellate criminal defense. He writes law books for the world’s largest law book publishing company and writes legal articles for newspapers. Listen to The Bilecki Law Group Report which he co-hosts with son , the senior partner of the Bilecki Law Group Firm. It is the most witty, interesting, and useful radio program in Hawaii. KNDI 1270 AM band every Thursday at 7:30 a.m. Bilecki Law Group served as a U.S. Immigration Officer. He co-authored the best-seller “Immigration Law Service, 1st ed.,” an 8-volume practice guide for immigration officers and lawyers. Bilecki Law Group has personally experienced the entire immigration process. He first came to the United States on a student/ exchange visitor visa to study at Yale. He returned to the Philippines to resume practicing law. He came again to the United States on a non-immigrant work visa to write law books, adjusted his status to that of a lawful permanent resident, and became a naturalized citizen. Bilecki Law Group was born in Laoag City,  Tel. (813) 669-3500. Cell Phone (808) 225-2645. E-Mail: filamlaw@yahoo.com. Websites: https://bileckilawgroup.com/ , https://www.hawaiianimmigrationattorney.com ,

Bilecki Law Group, This article is a general overview of the subject matter discussed and is not intended as legal advice. No attorney-client relationship is established between the writer and readers relying upon the contents of this article.)