Can I receive credit off of my sentence because my command illegally punished me prior to trial?

Can you receive a credit off of your sentence because your command illegally punished you prior to trial?

This is a frequent question we receive at Bilecki & Tipon and that answer always depends on the application of the specific facts of your case to the often complex law in this area. In an ideal world, a service member’s chain of command would actually presume him or her innocent unless and until guilt has been proven beyond a reasonable doubt.

The reality, however, is that many service members are treated as if they are guilty until proven innocent.  This often leads to commanders taking actions that constitute illegal pretrial punishment. To have a better understanding of whether or not you may receive confinement credit, we will explain what the law actually says.

The Presumption Of Innocence Is A Fundamental Component Of Due Process 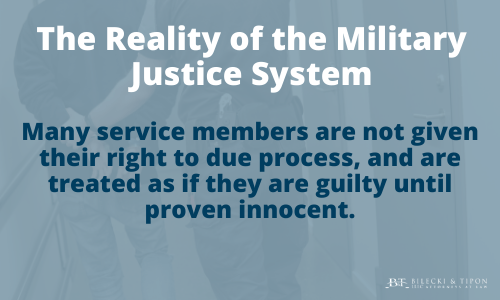 If a person may arbitrarily be confined before his trial, then in truth, punishment precedes conviction and the presumption of innocence avails defendant little. Id. (quoting DeChamplain v Lovelace, 510 F.2d 419, 424 (8th Cir.), judgment vacated as moot, 421 U.S. 996 (1975)).

While not directly related to pretrial punishment, it is important to understand that service members are entitled to receive day-for-day Allen credit for the amount of time they spent in pretrial confinement. United States v. Allen, 17 M.J. 126 (C.M.A. 1984). The Court in Mason extended Allen credit to situations involving pretrial restrictions that are “tantamount” or “equivalent” to confinement, but that do not involve actual incarceration.

When announcing the tantamount to confinement standard the Court in Mason held that day for day credit may be given for “pretrial restriction equivalent to confinement.” United States v. Mason, 19 M.J. 274 (C.M.A. 1985).  The court did this because it “recognized that the effect which restriction tantamount to confinement has upon an appellant is the practical equivalent of the effect which occurs from a similar period of actual pretrial confinement.” United States v. Gregory, 21 M.J. 952, 955 (A.C.M.R. 1986), aff’d, 23 M.J. 246 (C.M.A. 1986).

A Service Member Is Entitled To Credit Pursuant To Article 13 Of The UCMJ If The Government’s Intent Was To Punish.

Article 13 of the UCMJ states that punishment is prohibited before trial, and provides in pertinent part the following:

No person, while being held for trial, may be subjected to punishment or penalty other than arrest or confinement upon the charges pending against him, nor shall the arrest or confinement imposed upon him be any more rigorous than the circumstances required to insure his presence at trial.

Military case law distinguishes between “confinement credit” and “punishment credit.”  United States v. Coyle, 47 M.J. 626 (A.C.C.A 1997). Pursuant to United States v. Jauregui, three factors are relevant to the “’ judicial calculus’ in determining if there has been an Article 13 violation:

Additionally, the appellate courts have awarded Article 13 credit for command actions such as “public denunciation” of the accused and “degradation before the troops.” United States v. Cruz, 25 M.J. 326 (C.M.A. 1987).

As you can see, this area of the Uniform Code of Military Justice can be quite complicated.  To get an opinion on whether your particular circumstances should merit confinement credit, we recommend doing a consultation with an experienced civilian court-martial lawyer who can apply your facts to the law and give you a straight answer.  If you are interested in a confidential consultation, please call the attorneys at Bilecki & Tipon, LLLC and elevate your representation to the next level.

A summary court-martial is fundamentally different than a special or general court-martial in that it is non-judicial in nature.  There is no jury, no military …

Can I receive credit off of my sentence because my command illegally punished me prior to trial?

Can you receive a credit off of your sentence because your command illegally punished you prior to trial? This is a frequent question we receive …

Does My Chain Of Command Need To Read Me My Rights Before They Ask Me An Incriminating Question?

Does your chain of command need to read you your rights before they ask you an incriminating question? This is a question we frequently receive, …